Mapping Where Ground Movement May Be Felt From Earthquakes

Seismic hazard maps illustrate the likelihood of an area to reach or exceed a certain level of ground motion caused by earthquakes over a set time period. We generate our seismic hazard maps retroactively on an annual basis using the Probabilistic Seismic Hazard Analysis. This analysis evaluates the magnitude and location of potential earthquakes, their frequency, and the properties of the rocks and sediments that earthquake waves travel through.

Our seismic hazard maps show the 1% chance that an area could have experienced a certain level of perceived shaking from ground motion due to earthquakes in a specific year. We express the ground motion values as peak ground accelerations (PGA), which is the maximum acceleration the ground reaches during an earthquake. The PGA values are given as a percentage of g, where g is the standard acceleration due to the Earth’s gravity (9.81 metres per second squared). We then associate these values with levels of perceived shaking in the area and display these areas on seismic hazard maps. The level of perceived shaking uses the following general terms identifying how people or structures in the area could feel the ground movement (based on the Modified Mercalli Intensity Scale): 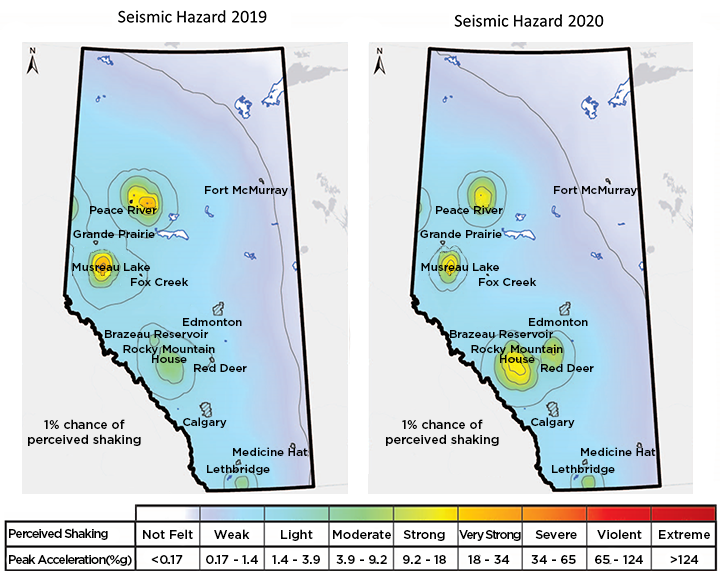 To show the evolution of the seismic hazard in Alberta, we generated seismic hazard maps for each year from 2011 to 2020. These maps characterize the changing earthquake patterns in Alberta. To generate these maps, we used our earthquake catalogue, which includes induced and natural seismic activity and excludes mining blasts.

The first known recorded case of induced seismicity related to hydraulic fracturing (i.e., injecting fluids to fracture rock) in Alberta occurred in 2011, the Cardston swarm in southwestern Alberta. Other occurrences of induced seismicity happened before 2011; however, seismic activity dropped off after the peak in the early 1980s (Rocky Mountain House, west-central Alberta) and the late 1990s and early 2000s (Cordel oil field, west-central Alberta). Between 2013 and 2015, induced seismic activity in the Fox Creek area (northwestern Alberta) posed the highest seismic hazard in Alberta. In 2015, the Peak Ground Acceleration topped at around 45% of gravitational acceleration, based on a 1% chance of it happening in that one year. After 2015, seismic hazard in Fox Creek decreased continuously due to multiple factors, including regulatory measurements and active mitigation by the operators. As of 2020, seismic hazard in Alberta seems dominated by emerging cases of induced seismicity related to hydraulic fracturing in the Duvernay East Shale Basin (near Red Deer, central Alberta) and wastewater disposal southeast of Musreau Lake (northwestern Alberta).

To create a forecast seismic hazard map for a specific year, we rely on data from the previous year. For instance, we used data from 2020 to forecast the seismic hazard for 2021. The forecast seismic hazard map for 2021 seems dominated by seismic sources near Musreau Lake (northwestern Alberta), east of Peace River (northwestern Alberta), and southwest of Rocky Mountain House (west-central Alberta). This forecast was limited to short-term hazard predictions because we assumed a constant rate of earthquakes for induced seismicity. For that reason and considering the rapid change in the seismicity patterns of induced seismic sources, this forecast was a reference point, a baseline of expected seismic hazard, not a conclusive seismic hazard model for 2021. In fact, when we analyzed the actual seismic hazard for 2021, we found some underestimation in the Fox Creek and Musreau Lake areas, and overestimation in the Peace River area. 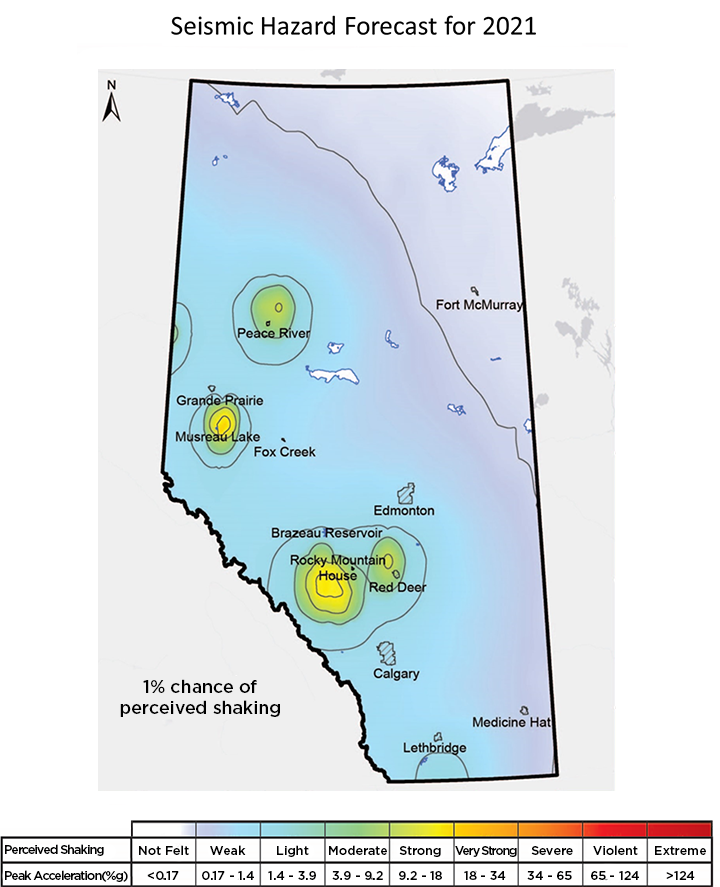