One of Canada’s Largest Modern Rockslides

One of Canada’s largest modern rockslides occurred on April 29, 1903, at 4:10 a.m. on Turtle Mountain in the Crowsnest Pass, which is approximately 250 km south of Calgary, in southwestern Alberta. Approximately 30 million m3 (82+ million t) of rock buried a portion of the town of Frank, killing more than 70 people. This catastrophic failure of Turtle Mountain is known as the Frank Slide. Since then, various government groups, universities, and geotechnical consulting companies have been studying the potential of a second slide.

The History and Geology of Turtle Mountain and Frank Slide

How Turtle Mountain was Created

More than 300 million years ago, the area that is now the Crowsnest Pass, Alberta, lay at the bottom of a shallow ocean. Sea creatures with calcium-carbonate-rich shells and skeletons lived and died in the warm shallow ocean. Their bodies drifted to the bottom, building thick layers of calcium carbonate that compressed into limestone. These thick layers of rock are known to geologists as the Livingstone and Banff formations.

Gradually the shallow ocean regressed, exposing a vast area with many rivers and huge deltas. Vegetation grew and died on this river-covered area, sinking into swamps, and creating layers of organic material that gradually compressed into coal approximately 140 million years ago. Wind and water laid down additional layers of sand, silt, and mud, each to be buried and compressed, forming sandstone, siltstone, and shale. These layers of rock are known to geologists as the Kootenay Group.

About 60 to 70 million years ago, the land began to shift and buckle, causing the layers of limestone, sandstone, shale, and coal to fold, break, and uplift. This is known as orogenesis or mountain building, in this case it was the Rocky Mountains. Through this process, Turtle Mountain was created. 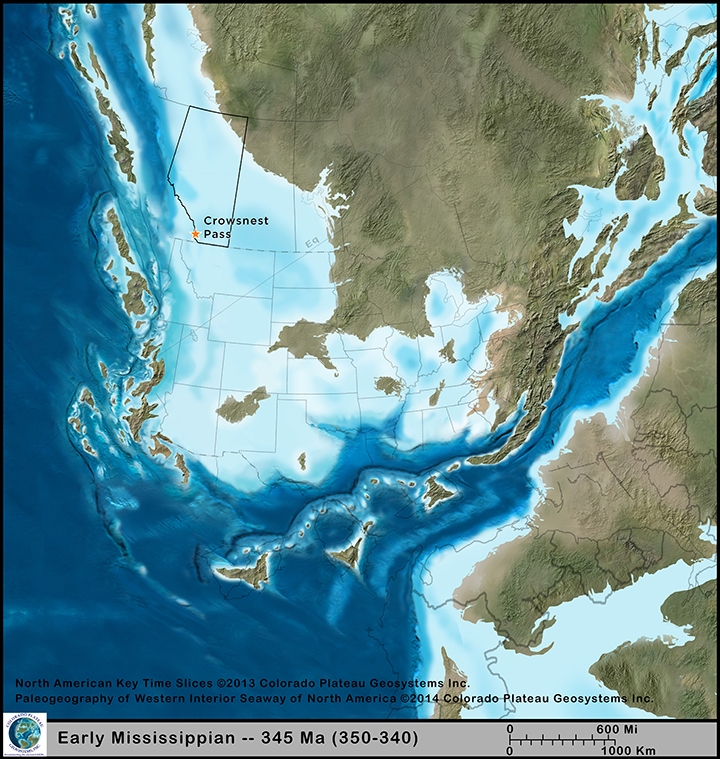 Structural Geology of Turtle Mountain Before the Frank Slide in 1903

Turtle Mountain is composed of different layers of limestone with large karst caves and caverns, sandstone, shale, and coal. These layers are folded upward into an arched “A-frame” shape, commonly known as the Turtle Mountain Anticline. The lower portion of this anticline was broken from tectonic pressure from the west during mountain building, creating a fault called the Turtle Mountain Thrust Fault. The rocks above this fault surface slid along the fault to the east.

Before the Frank Slide the layers on the eastern side of the mountain were steeply sloped and stacked one on top of another, like a deck of cards tilted at an angle. This area is known as the Eastern Fold Limb. It is this area of Turtle Mountain that changed dramatically after the Frank Slide.

Image: Reconstructed before photo of Turtle Mountain, Frank, Alberta, in 1903.

Structural Geology of Turtle Mountain After the Frank Slide in 1903

After the Frank Slide, Turtle Mountain’s surface geology was significantly changed when the entire Eastern Fold Limb failed and slid down the mountain. This event removed a portion of the A-frame shaped fold, exposing the fold hinge in the scar left behind after the slide (the slide scarp), and unearthing the different rock formations within. The coal seam that was being mined in the early 1900s, and at the time of the Frank Slide, is now exposed at numerous locations at the mountain base, however, it is unknown if the coal seam exposures were visible prior to the slide.

Other visible changes to Turtle Mountain after the Frank Slide include the appearance of:

Factors Contributing to the Frank Slide

In 2000, BGC Engineering Inc. was hired by the Government of Alberta to conduct a geotechnical hazard assessment of the south flank of the Frank slide. Their internal report suggested that the geological structure of Turtle Mountain was the primary factor that contributed to the failure of the eastern slope. The following factors potentially played a role:

In a study we conducted with the University of Lausanne, Switzerland, we identified three separate failure zones on upper South Peak of Turtle Mountain known as the subsidence, wedge, and toppling or sliding zones.

The subsidence zone (blue) is a highly fractured area which appears to be sinking due to frost wedge displacement. Freeze-thaw cycles produce frost wedging in the surface and sub-surface fractures.

The wedge zone (red) doesn’t represent an active block, but it should be considered as a passive wedge influenced by stress-induced movements in the rear portion of the peak. The stress could be induced by the vertical movements of the subsidence zone 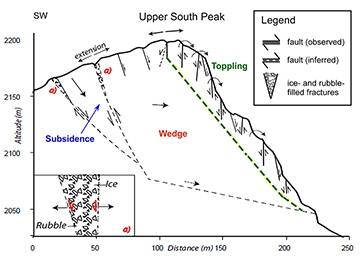 Devonian to Cretaceous aged rock layers make up the geology of Turtle Mountain and the surrounding Crowsnest Pass region with Paleozoic carbonates and Mesozoic clastics. On April 29, 1903, more than 30 million m3 (more than 82 million t) of limestone rock broke away, leaving a rockslide scar about 1 km wide and 425 m long on Turtle Mountain. The majority of the rock-slide material from the Frank Slide is from Paleozoic limestone of the Livingstone Formation.

The Turtle Mountain coal seam is located at the foot of Turtle Mountain and is part of the Kootney Group, which consists mainly of sandstone, siltstone, and shale. The Frank Mine produced coal starting in 1901 and ceased mining in 1917, then officially closed later in 1918. During the Frank Slide the mine entrance was buried under the debris causing the trapped miners to have to dig out at a near-vertical angle.

Turtle Mountain contains many structural geology components that include folds, faults, and fissures. More notably are the Turtle Mountain Anticline and Thrust Fault that give the mountain its unique landscape and structural geometry. Turtle Mountain also has deep cracks (open fractures) known as fissures. These fissures range in size and depth, and some are over 30 m deep and 4 m wide on South Peak. The geological structure of Turtle Mountain is believed to be the main reason the Frank Slide occurred.