Immediately after the Frank Slide, geologists R.G. McConnell and R.W. Brock were dispatched from Ottawa to investigate the two remaining peaks on Turtle Mountain, known as North Peak and South Peak. McConnell and Brock suggested that North Peak was hazardous to the inhabitants of the valley below. Between 1931 and 1933, John A. Allan, the founder of the Alberta Geological Survey, mapped the fissures on the back side of Turtle Mountain. It became apparent that South Peak was in fact the area of instability. Allan reported that many deep fissures surrounded a 5.35 million m3 volume of the peak (reported as 7 million cubic yards). Evidence from Allan’s studies shifted the monitoring focus to South Peak.

Various technologies for recording, predicting, and monitoring Turtle Mountain’s rock movements were used over the last century since the Frank Slide. These range from simple tape measurements made by John Allan in the 1930s to different monitoring systems in the 1980s through to present day. 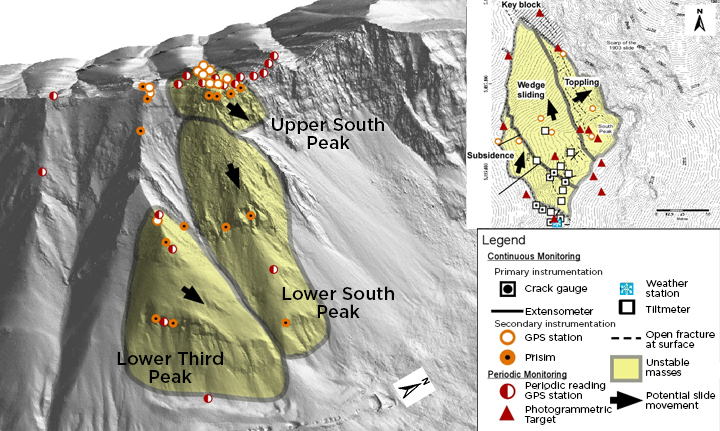 Paint markings were used by John Allan in 1933 to measure large cracks by measuring the distance between two paint reference points made on the rocks. 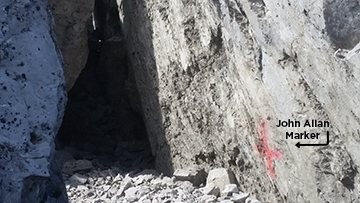 Photogrammetry uses multiple sets of low-level aerial photos to monitor specific spots on the ground. By taking several photographs at different times, we can compare these images and measure how much each target has moved horizontally and vertically. In 1981, 24 artificial targets were installed on Turtle Mountain to give broad coverage around South Peak. To analyze the photogrammetry results, photo co-ordinates were compared from the 2005 images to the 1982 aerial photos. On average, the rate of movement corresponded to annual deformations of 0.9–3.2 mm over the 23 years. 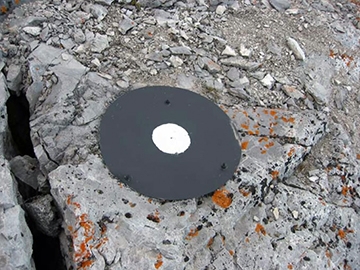 The weather station became non-operational during a long, hard winter in the Crowsnest Pass in 2013–2014. Multiple sensors stopped collecting data and we were unable to bring them back online after multiple remote attempts.

During our 2015 field visit, our staff noted damage to the weather station and presumed it was from environmental conditions such as wind, snow, ice, and lightning. Another possibility could be damage from vandalism.

The weather station was decommissioned in 2017 and components inside the station housing were removed. 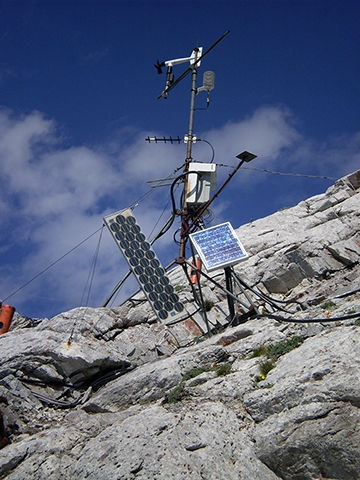 A thermistor is an electrical probe that measures temperature. It is made of various semiconductor materials whose electrical resistance varies as a function of temperature. Thermistors can be arranged in a series on a cable to measure profiles of temperature within the ground.

To complement the weather station data with subsurface information, we installed a string of six thermistors in the South Peak borehole at various depths in early October 2004. A seventh sensor was located aboveground in the protective conduit connecting the thermistor cable to the data-gathering equipment in the borehole enclosure.

The borehole thermistors were decommissioned in 2017. 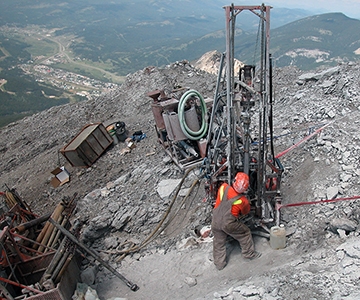 We installed a water-level and water-outflow monitoring system near the Frank Mine entrance at the base of Turtle Mountain in 2004. The site was chosen due to the location relation between precipitation on top of the mountain and the amount and rate of water coming out of the base of the mountain. 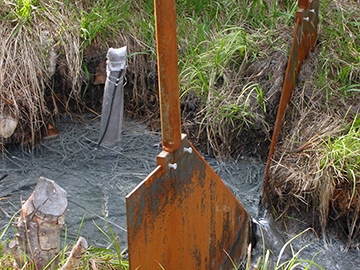 Electronic distance measurement (EDM) (also known as laser ranging) uses lasers and mirrors to measure the mountain’s movement. A base station emits a laser pulse to a mirror prism installed on the rock face to be measured. The base station instrument measures how long it will take the laser beam to travel back from the prism, detecting movements through changes in distance.

In the early 1980s, a series of remotely monitored reflective prisms were installed on the west side of South Peak. The EDM system measured the distance to these prisms from four base stations on the valley floor, located between three and seven kilometres from the mountain peak. 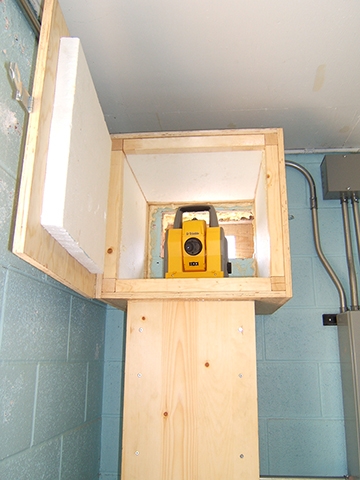 Between 2005 and 2007, an additional array of prisms was installed on the eastern face of Turtle Mountain. We mounted a computer-controlled, laser-ranging theodolite in a protected area on the valley bottom, located about three kilometres away from the mountain to collect data from 19 prisms on an hourly basis. 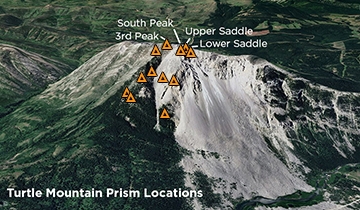 We found the EDM technology had limited value because the system wasn’t always reliable. Measurements could only be taken if there was a clear line of sight between the instrument and the prisms. Unfortunately, the prisms are often covered in snow and ice during the long winter in the Crowsnest Pass.

In 2008 and 2009, the EDM system was deemed non-operational and was decommissioned. The prisms, however, remain on the mountain face.

Crackmeters (or crack gauges) are thin steel rods anchored on both sides of a crack wall to measure how the cracks separate when the mountain slope moves. The most sensitive of the different monitoring tools on the mountain is a vibrating-wire crack gauge that can detect changes as small as ten microns (the thickness of a human hair). Twenty-two active crackmeters were installed in 2003 on the western side of South Peak. Crackmeters take continuous measurements to determine if the surface fractures open at a constant rate or rapidly in one event. Crackmeters are sensitive to snow and ice loading, which introduces large errors in the readings. Although metal roofs were built to protect the crackmeters from snow and ice, it was not enough to protect them, and they were deemed unsuccessful. The crackmeters became non-operational due to lightning damage, and the network was decommissioned in 2017. 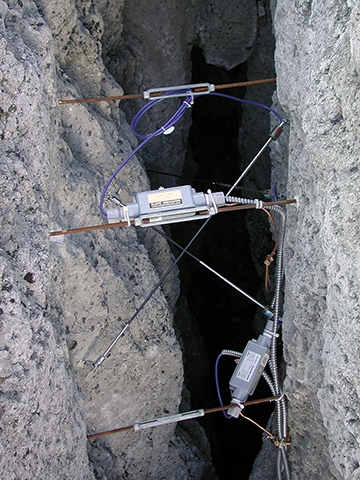 A tiltmeter uses electronics to precisely measure angle changes. Tiltmeters are fixed to the sides of large blocks and measure the rotation of the rock.

There were ten tiltmeters installed in the early 2000s along the highly fractured summit ridge near the South Peak. They were used to show temperature cycles, such as seasonal and daily changes. Seasonal tilt change displayed an increase in tilt at the beginning of the summer and return to the previous trend at the beginning of autumn, in general. A similar cyclic variation in tilt occurred on a much smaller scale with daily temperature fluctuations. The tiltmeter network was negatively affected by high humidity inside the instrument enclosure, making the interpretation of small rotation very difficult.

The tiltmeter network was decommissioned in 2017. 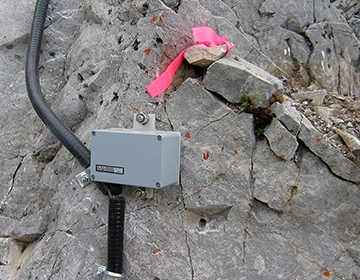 Five extensometers were installed in 2004, and a sixth in 2006. The extensometers were anchored into bedrock on either side of a crack. One end (head assembly) contains a weight that connected to the other end (anchor end) by a steel cable. The whole sensor was hung over a transducer. The suspended weight shifted when the rock moved. The transducer measured the distance from this shift. This information was then read and stored by a datalogger.

The extensometer network became non-operational due to sensor failure and environmental factors; it was decommissioned in 2017. 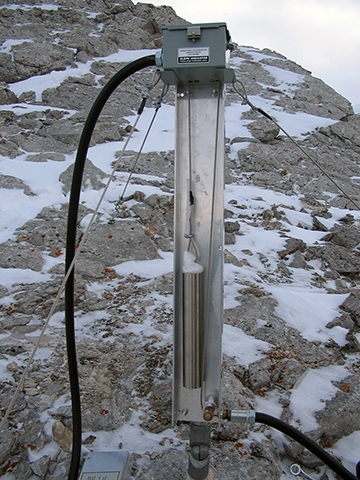 Passive microseismic monitoring uses a network of sensors called geophones or accelerometers to 'listen' to the mountain to detect small tremors. These sensors can detect extremely small tremors anywhere within the mountain. These tremors may be caused by strain accumulation, or the release of stress built up in the rock from movement. These movements may be from regional seismic activity or from within the mountain due to adjustments within the rocks, possibly caused by the gradual collapsing of abandoned mines or other small internal movements, such as landslides.

The microseismic network was installed in the early 2000s to help locate the movements within the Turtle Mountain. It had an array of seven stations: six surface and one borehole. The surface stations were over a wide area ranging from the Crowsnest River to South and Third peaks. The borehole station was near South Peak and had instruments at 24 m and 38 m depths. The seismic data was radioed continuously to the Frank Slide Interpretive Centre.

Most of the seismicity seen on Turtle Mountain was minor; however, there was a clear connection between increased seismicity and rock temperatures passing through the freezing point.

Unfortunately, the microseismic network was not successful due to a number of factors, including the highly fractured bedrock

In 2008, the passive microseismic system was no longer operational and was later decommissioned in 2017. 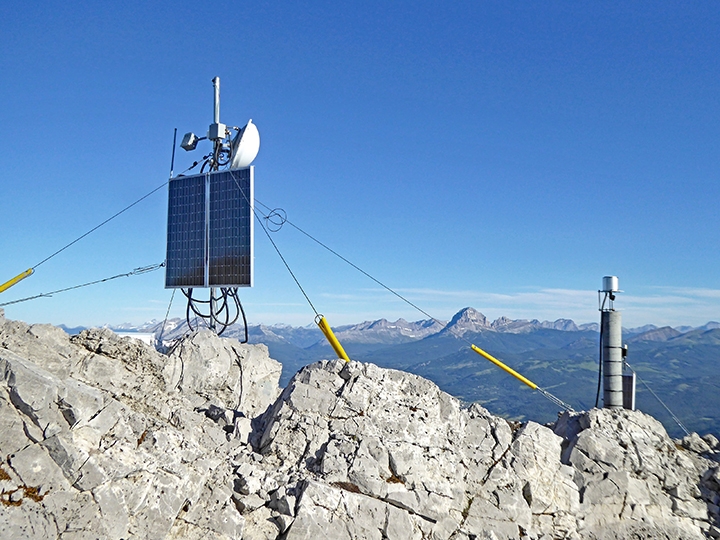 A differential global positioning system (dGPS) uses satellites to locate points on the Earth. By collecting information from different satellites, we can locate the position of a GPS antenna within a few millimetres.

In the early 2000s, we installed ten permanent dGPS monitoring stations on South Peak and the eastern face of Turtle Mountain. The signals from these stations were collected at a central collection point on the mountain and data was sent via wireless radio link to Blairmore and uploaded to our servers in Calgary. We compared these signals to those with base stations on Third Peak and in the valley bottom for analysis.

Each of these stations has two parts, a GPS antenna mounted on a concrete pillar and an electronics box containing telemetry. The latter is mounted on a separate antenna mast located several metres away to avoid possible radio interference between the two.

Six out of ten stations were decommissioned and dismantled in 2017, leaving only the concrete pillar in place. The remaining stations are considered out of scope, due to difficulties reaching their locations; therefore, only the battery enclosures, electronics, and conduit were removed. 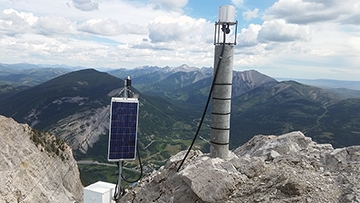