Stresses building in rocks due to tectonic motion of crustal plates are the driving force behind natural earthquakes. Most naturally occurring seismic events in Canada are due to the Juan de Fuca plate subducting beneath the North American plate off the coast of British Columbia. Tectonic forces are also present in intraplate areas such as Alberta, although considerably weaker, resulting in less frequent and lower magnitude earthquakes. Pre-existing faults are apparent within the bedrock and crystalline basement of Alberta. These faults formed during the geological past when the motions driving the rock under Alberta were significantly more active. 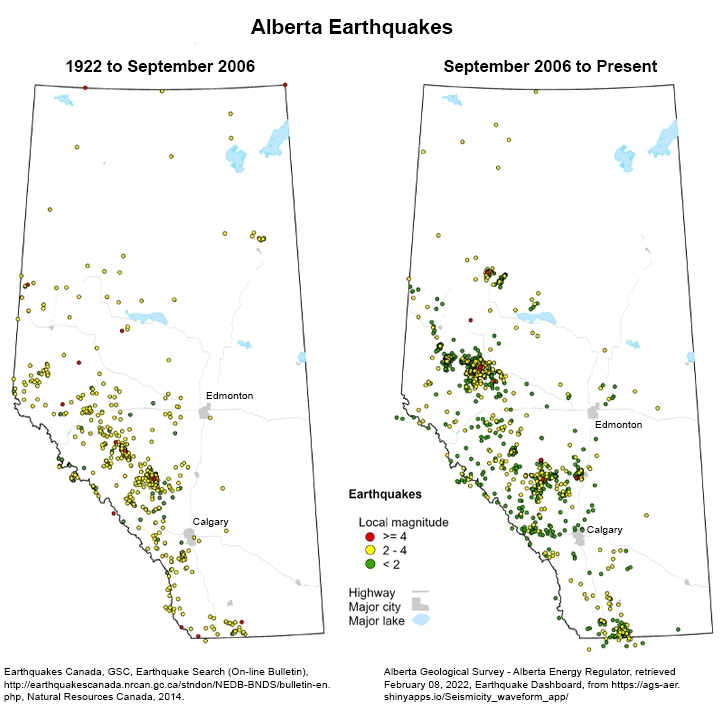 While Alberta was historically seismically quiet, the number of earthquakes recorded yearly has increased over time. The increase in numbers of recorded earthquakes is due to two main factors: increasing seismic station density (improving the network's earthquake-detecting ability) and incorporating earthquakes induced by human activity (induced seismicity). Between 1918 and the mid-1960s, the branch of the federal government, now known as Earthquakes Canada, recorded less than a dozen minor earthquakes in Alberta. Monitoring seismic activity within Alberta began in the mid-1960s when Earthquakes Canada installed several seismographs in the province. Before 1975, these instruments recorded less than 20 earthquakes yearly but from 1977 to 1988, there was a notable increase in recorded minor events. This increase in recorded minor earthquakes (local magnitude [ML] 2.0–4.0) was coincidental with the surge in induced seismicity related to gas extraction activities near Rocky Mountain House, west-central Alberta. Another increase occurred in the early 2000s, likely related to both an increase in the density of stations and the surge of induced seismicity related to wastewater disposal in the Cordel oil field, west-central Alberta.

During the late 2000s, an increase in recorded microearthquakes (ML <2.0) was concurrent with increasing seismic station density in the province. After 2011, the number of minor earthquakes (ML 2.0–4.0) increased, likely related to incorporating induced seismicity caused by hydraulic fracturing (e.g., seismicity near Fox Creek) and improvements in the monitoring network. 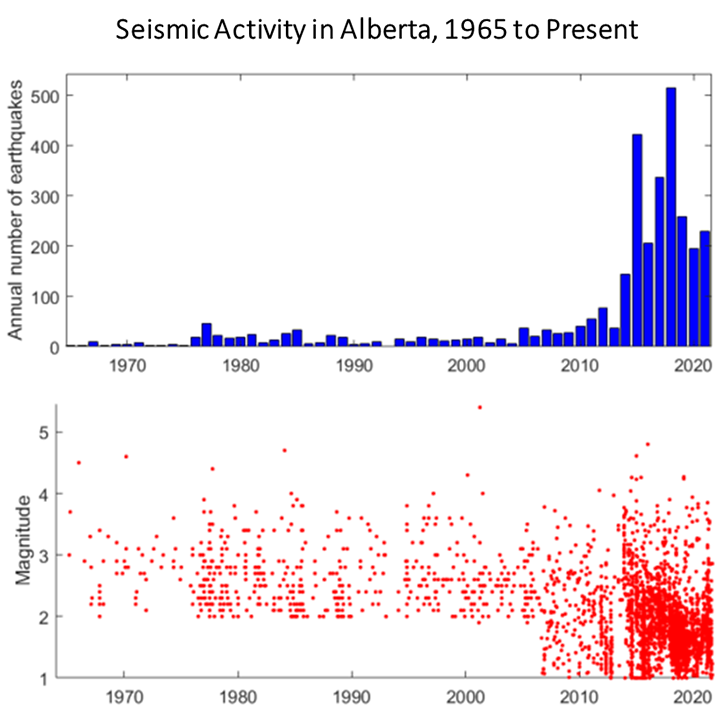 The ROCN and ROCS cover the mountainous southwestern section of Alberta and are considered the most active natural seismic source areas in Alberta. The FTH seismic source area is a transition zone between the relatively active mountainous region and the stable midcontinent area. The SCCWCH comprises most of the northeastern section of the province; it is an area characterized by low earthquake magnitude and sparse seismicity.

Our experts maintain a catalogue of earthquakes dating back to 2006 which we use for analyzing earthquakes and their trends in the province. By analyzing our earthquake catalogue, we identified two additional areas in Alberta where clusters of seismic events have a natural origin:

The Peace River Arch is a remarkable large-scale tectonic structure in the Western Canada Sedimentary Basin. The arch’s formation considerably disturbed the surrounding rocks, leaving behind major faults in the subsurface cutting the layers of rock above the arch. The geological complexity of the Peace River Arch helps explain the occurrence of seismic events in this area, which, together with the Rocky Mountains, is one of the most active natural seismic sources in Alberta. In the Milk River area, a large structural complex identified as the Sweetgrass Arch could also explain the occurrence of natural earthquakes in this area.