Remnants of Glacial Lakes on Our Landscape

Although there are relatively few large lakes on the modern landscape, glacial lakes covered large parts of our province during deglaciation approximately 15 thousand years ago—including areas now occupied by Alberta’s major cities. These lakes left behind thick deposits of fine-grained sediments that cause geotechnical issues when planning infrastructure placement; a map of these deposits is valuable information for urban and rural planning. Our experts reconstructed the extents of glacial lakes over the whole province, providing publicly available maps and data showing where glacial lake sediments occur. 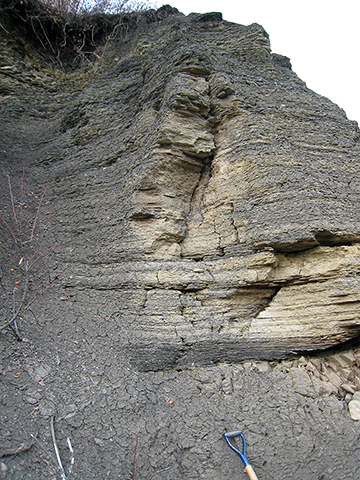 Twenty thousand years ago most of Alberta was covered by the Laurentide and Cordilleran ice sheets. As the Laurentide Ice Sheet melted and retreated, generally towards the northeast, it blocked the natural drainage route, causing large volumes of water from the melting ice to pond in glacial lakes along the ice margin. The meltwater drained from these short-lived lakes through spillways. Today, remnants of these glacial lakes are usually flat extensive plains, composed of fine-grained sediments (glacial lake sediments) that were deposited at the bottom of these glacial lakes. Remnants of the spillways contain what are sometimes called ‘misfit streams’ because the present-day water courses are much smaller than the size of the channel making them look misplaced. Lakes and reservoirs fill many of these melt-water channels in Alberta, such as Chestermere Lake near Calgary, Driedmeat Lake near Camrose in central Alberta, and Chin Lakes east of Lethbridge in southern Alberta. 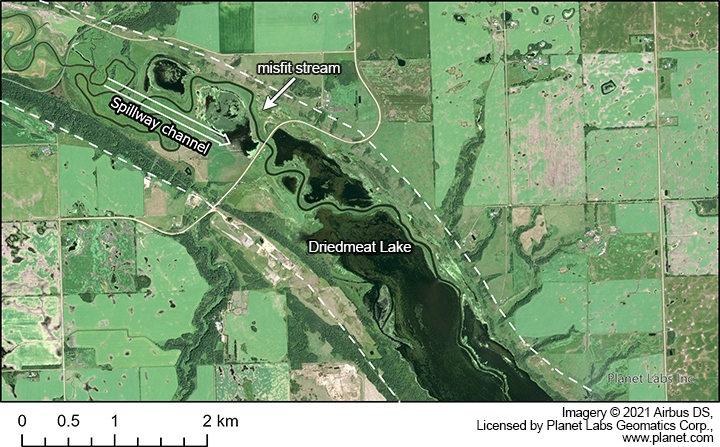 Across Alberta, glacial lake sediments account for approximately one-fifth of the surficial sediment. They predominantly occur as large plains, often used for agriculture. In south-central to central Alberta, glacial lake deposits cover large areas of Edmonton and some portions of Calgary, particularly along the Bow River valley. 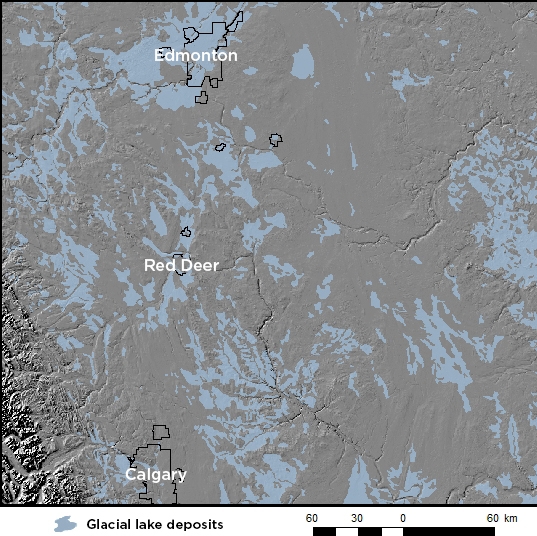 Where possible, we confirmed the extent of reconstructed glacial lakes with remnant shoreline sediments, such as those north of Lesser Slave Lake. Many of these shoreline deposits are very subtle and difficult to observe on the ground, while others form thick sand or coarse deposits. 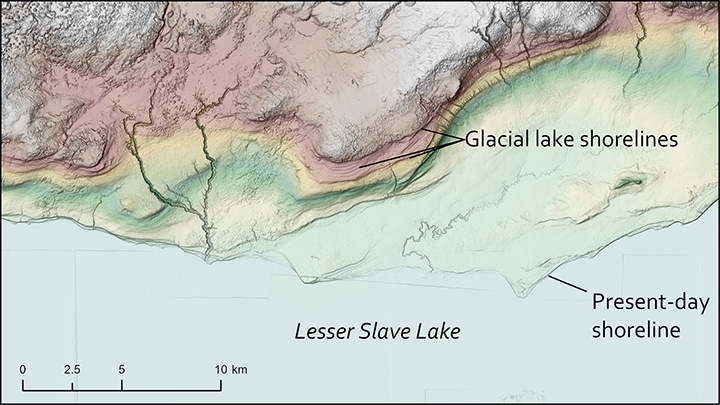