The Importance of Sand and Gravel

Sand and gravel are a significant geological resource in Alberta. Industry uses these hard, unreactive, rock particles primarily for aggregate in producing concrete for residential and commercial buildings, industrial projects, and highways, as well as in the manufacture of glass, fibreglass, and insulation. The oil and gas industry also uses sand in hydraulic fracturing operations. The widespread demand for aggregate resources and the province’s abundant sand and gravel deposits has made Alberta the second largest producer of sand and gravel in Canada.

More About Sand and Gravel

Sand and Gravel Distribution Across Alberta

Sand and gravel deposits are widely distributed across Alberta and occupy a range of settings which reflect the influence of fluvial and glacial processes on the evolution of the Canadian Prairies.

Alberta’s landscape contains several isolated, flat-topped uplands including the Cypress Hills, Hand Hills, Swan Hills and the Caribou Mountains. These are capped by well-rounded quartzite gravel that originated from the western ranges of the Rocky Mountains and were deposited before the onset of continental glaciation.

Overall, clast size in these upland gravels decreases from boulder-sized gravels in the west, to finer-grained gravels in the east. These sediments were transported by powerful rivers that flowed across a Prairie land surface that had a steeper drainage gradient than exists today. Continued tectonic uplift of the Rocky Mountains promoted further tilting of this surface, resulting in extensive fluvial downcutting and establishing large preglacial fluvial systems across Alberta. These systems redeposited gravel across Alberta, examples of which can be observed in several plains and lowlands settings, including in the Red Deer, Ponoka, and Peace River regions. These deposits predominantly comprise broad sheets of pebble to cobble gravel, which become increasingly sandy to the east.

Preglacial fluvial systems remained relatively stable until ∼0.4 million years ago, when the onset of continental glaciation disrupted the regional drainage, eventually resulting in many valleys becoming infilled by younger glacial and fluvial sediments. Consequently, although the remnants of these systems are well-preserved across Alberta, they are not visible on the modern land surface.  However, in locations where these buried valleys are exposed, the basal unit of the infill sequence commonly comprises thick beds of preglacial sand and gravel (see image below).

Sand and gravel eroded and deposited by meltwater produced by melting glaciers and ice sheets is widely dispersed across Alberta. Landforms associated with these glaciofluvial deposits include

Glaciofluvial sediments and landforms differ from those found in fluvial landscapes, mainly because the production and discharge of glacial meltwater is highly variable, and reflects daily, seasonal, long-term climate cycles, and intermittent discharge events. When combined with the large volume and wide range of sediment types occurring across glaciated landscapes, the resulting glaciofluvial deposits are typically poorly sorted and exhibit distinctive sedimentary structures including

During the retreat of the Laurentide and Cordilleran ice sheets from Alberta, large quantities of fast-flowing meltwater were released from the melting ice. As meltwater flowed from the front of the ice sheets, it would typically spread across adjacent land surfaces, depositing fan-shaped outwash plains. These plains commonly contain sequences of stratified sand and gravel that get progressively finer grained further from the ice margin. In locations where sediments buried the ice margin, outwash plains commonly exhibit pitting due to material collapsing into thaw pits as the underlying ice slowly melted.

Numerous glaciofluvial features relate to how the southwest Laurentide Ice Sheet retreated down the slope of the regional drainage gradient, which resulted in eastward flowing meltwater becoming concentrated along the ice margin. This meltwater eroded broad shallow channels and spillways that outline the lobate configuration of the Laurentide Ice Sheet in southern Alberta. Glaciofluvial sediments associated with these channels comprise sand and gravel deposited within bars and terraces. In some places, meltwater flowing along these channels drained into proglacial lakes that also formed along the retreating ice margin. Many of the deposits that prograded into the lakes contain fine-grained sediments, but some contain coarser-grained materials deposited within features such as kames and deltas, prominent examples of which occur immediately west of Stony Plain (see image below). Kames are irregular mounds of ice-contact sand and gravel whereas deltas were deposited proglacially and typically exhibit a more lobate morphology. These landforms both resulted from meltwater draining along the present-day Sturgeon River valley into a large proglacial lake that covered the Edmonton region. The extensive kame and deltaic landforms west of Stony Plain commonly exhibit pitting due to material that collapsed into thaw pits as the underlying ice slowly melted. 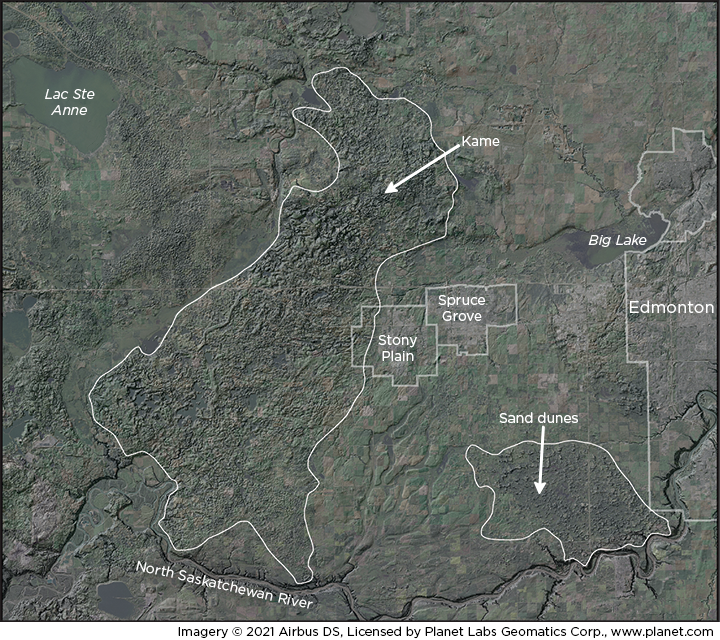 The postglacial reworking of glaciofluvial deposits is a major source of sand and gravel across the modern Alberta landscape. Most of the eolian features on the Canadian Prairies evolved during deglaciation, when limited vegetation and strong winds flowing off the retreating ice sheets mobilized sand in outwash plains and deltas, redepositing it in large dune fields throughout the province, particularly along the Peace and Athabasca rivers in northern Alberta (see image below).

Alluvial sand and gravel are common within terraces and floodplains along postglacial rivers. These sediments are generally finer grained than glaciofluvial deposits, as modern rivers typically have less energy than meltwater streams and therefore less ability to transport large particles. Extensive deposits of alluvial sand and gravel occur within bars, terraces, and floodplains along Alberta’s major rivers including the 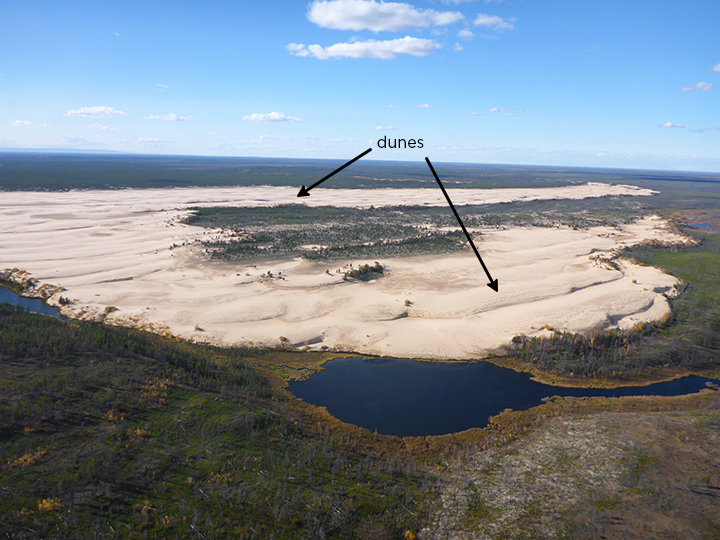