What is Geothermal Energy?

Where Does Geothermal Energy Come From? 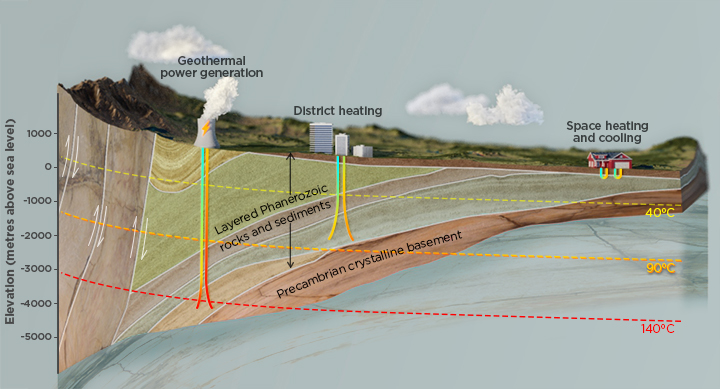 Wherever we are in the world, there is heat to some degree in the subsurface below our feet. Sources of heat contributing to the Earth’s internal heat flow include heat generated

The temperature in the ground increases with depth indicating that heat is moving from the Earth’s interior towards the surface. This increase in ground temperature with depth is known as the geothermal gradient. The temperature a few metres below ground surface generally reflects the average annual air temperature at a given location, whereas the estimated temperature is about 900°C at the base of the Earth’s crust, about 4000°C at the boundary between the mantle and the core, and likely more than 5500°C within the Earth’s core. We can see a surface manifestation of the heated subsurface at thermal springs. In thermal springs, geothermal energy heats groundwater that travels to the surface through natural pathways in the rock called fractures. The Miette Hot Springs near Jasper and the Cave and Basin Hot Springs near Banff (western Alberta) are excellent examples of thermal springs in Alberta. Three main mechanisms move heat from its deep sources towards the Earth’s surface:

Large-scale convection of material in the Earth’s mantle transports heat from the Earth’s outer core to the crust. The major form of heat transfer in the crust is conduction, but some heat transfers by convection in areas of circulating crustal fluids and by the rise of magma below active volcanoes. Areas of high convective heat flow were traditionally the primary targets for geothermal exploration and development because high volumes of fluids at high temperatures were accessed at shallow depths, compared to deeper purely conductive settings. With advancements in technology, it is now possible to extract heat from deeper conductive settings. We can inject fluids that fracture low-permeability rocks (i.e., hydrofracturing) creating a reservoir where injected fluids absorb the Earth’s heat and are then piped back to the surface (enhanced geothermal systems). Although geothermal research and development is in its early stages, Albertans are currently using this renewable energy source for residential heating and cooling applications. For electricity generation and industrial and commercial heating and cooling, companies in Alberta are developing advanced geothermal technologies to access and use geothermal energy. Our province's first conventional geothermal heat and power facility is expected to be operational in 2025. The future of this green energy source in our province is positive.