How Fluid Injection Can Cause Induced Seismicity

The most recent increases of induced earthquakes in Alberta are related to injecting fluids into the ground for various reasons including fluid disposal and hydraulic fracturing. During fluid disposal, operators inject fluids into the subsurface to dispose of wastewater and other fluids in an environmentally friendly way. During hydraulic fracturing, operators inject fluids (and possibly other components) into a well to fracture the rocks, improving oil and gas recovery or for producing geothermal energy. The following unusual set of conditions are required for fluid-injection activities to cause an earthquake:

Two main processes contribute to changing the stress/forces on the fault to trigger earthquakes.

The movement of rocks along the fault (slipping) causes the earthquake. 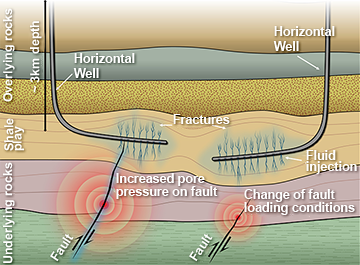 Determining if an Earthquake was Induced

In 2013, we used these criteria to determine the cause of earthquakes west of Fox Creek, northwestern Alberta. Our results showed hydraulic fracturing operations in the Fox Creek area induced the nearby earthquakes.

Earthquakes first started ~30 km southwest of Rocky Mountain House, west-central Alberta, in the 1970s and peaked in 1988 (up to local magnitude (ML) 4.0). Studies linked these earthquakes to gas extraction from the Strachan sour gas reservoir in the Leduc Formation.

Earthquakes in the Brazeau area, 30 km north of Nordegg, west-central Alberta, started in the 1990s, peaked in the early 2000s (up to ML 4.0), and then started declining. Studies linked these earthquakes to wastewater disposal in the Rundle Group.

Between December 2011 and March 2012, more than 60 small earthquakes (up to ML 3.0) occurred north of Cardston, southwestern Alberta. The cause was hydraulic fracturing in a nearby well. The earthquakes occurred directly below this well, in the crystalline basement rock.

Low magnitude earthquakes first started in the Fox Creek area, northwestern Alberta, in December 2013. We associated them with nearby hydraulic fracturing operations in the Duvernay Formation. Due to concerns after an event was felt by nearby residents and workers in January 2015 (ML 4.6), the Alberta Energy Regulator implemented a traffic light protocol, requiring operators to monitor seismicity and either modify or stop operations when seismic events reach specific magnitudes.

In early 2018, a sequence of induced events occurred near the city of Red Deer, central Alberta. We linked these induced seismic events to hydraulic fracturing activities at the Duvernay East Shale Basin. In March 2019, a ML 4.24 event in this area led to the Alberta Energy Regulator implementing another traffic light protocol.

A cluster of events started in January 2018 in an area approximately 5 km east of Musreau Lake, northwestern Alberta. To date, the largest event recorded has a ML of 3.94 (December 2019). Our analysis suggests a strong correlation between the seismicity and wastewater disposal activities nearby. 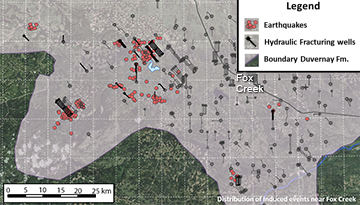