Covering 52% of the land surface, moraine is the most abundant surficial geological deposit in Alberta. These deposits create distinct terrain types across the province, which impact how the land is used. Determining the genesis, composition, and engineering properties of these deposits provides valuable information for surface water studies and mineral prospecting, and for agencies responsible for managing natural resource, planning infrastructure, and protecting the environment. 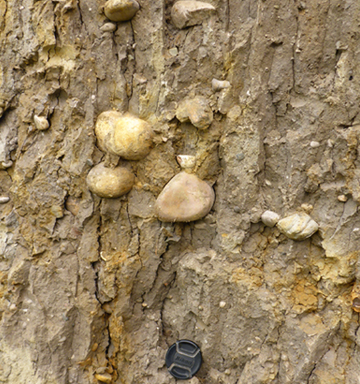 Moraine comprises a range of sediments deposited directly by glacial ice that contain a mixture of clay, silt, and sand, as well as minor pebbles, cobbles, and boulders. Collectively, these sediments are referred to as glacial diamictons (till). In Alberta, it is common for tills to also contain blocks of bedrock, stratified sediment, or lenses of glaciolacustrine and/or glaciofluvial sediment.

The advance and retreat of continental ice sheets during and prior to the last glaciation was responsible for depositing moraine across the plains of southern, central, and northeastern Alberta and the uplands in the west and north. During the last glaciation, which culminated approximately 22 000 years ago, the Laurentide Ice Sheet advanced south to southwestwards across Alberta, converging with the Cordilleran Ice Sheet, which advanced eastwards from the Rocky Mountains onto the Southern Alberta Plains. These ice sheets eroded large areas of the landscape, incorporating sediments and bedrock within the ice and then deposited moraine across the province as the ice retreated. 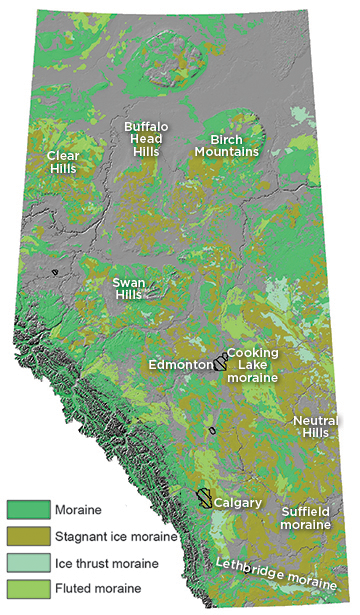 Depending on whether material was transported on, within, or beneath these ice sheets, till can be identified based on the primary processes of deformation (glaciotectonite), a combination of deformation and deposition (subglacial traction till) or deposition alone (melt-out till).

Moraine plains consist of low relief blankets of till that are typically thick enough to obscure features on the underlying bedrock surface. This type of moraine resulted from the deformation and eventual deposition of material along the ice sheet bed. It occurs across upland and lowland settings in northern Alberta, and across uplands and benchlands that parallel the Rocky Mountain Foothills.

Stagnant ice moraine is the result of the collapse and slumping of englacial and supraglacial debris due to buried stagnant ice melting at the glacier margin. A common terrain associated with these deposits is characterized by low- to high-relief hummocky topography comprising extensive areas of circular to elongate mounds and linear ridges. These features contain a range of till types and may locally include stratified glaciolacustrine or glaciofluvial sediments and deformed bedrock. Stagnant ice moraine is widespread throughout north-central Alberta, particularly across the Buffalo Head Hills and the southern flanks of the Birch Mountains, Clear Hills, and Swan Hills. It is also prominent between the Cooking Lake, Suffield, and Lethbridge areas of central and southern Alberta, where it flanks low-relief corridors of fluted moraine (see image below). 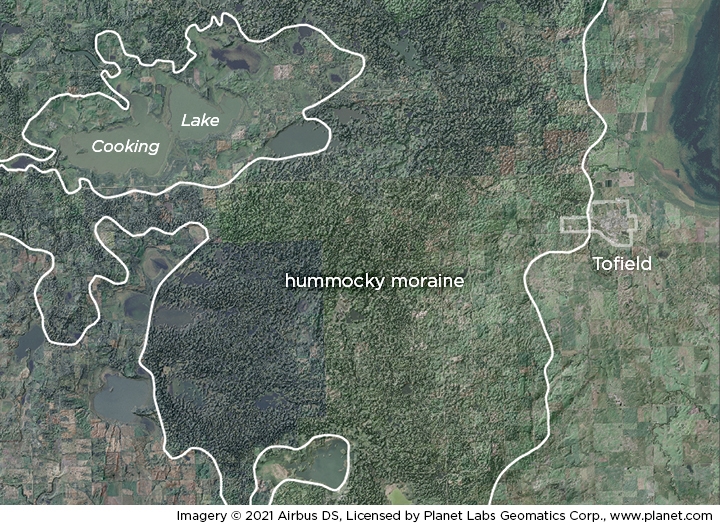 Fluted moraine comprises a low to moderate relief, ridged and furrowed terrain that resulted from the streamlining of sediments by glacial ice. Examples of these streamlined bedforms include mega-scale glacial lineations, flutings, and drumlins, all of which are oriented parallel to the direction of ice flow (see image below). In many areas of the province, these features reveal complex local and regional ice-flow patterns, which are significant for understanding the glacial history of Alberta. When combined with information on till genesis and composition, mapping fluted moraine increases our understanding of the direction and distance of mineral transport by the ice sheet, and the hydrogeological and geological engineering characteristics of an area. Fluted moraine is particularly well-developed across the western and eastern plains, where prominent, low-relief corridors of fluted moraine extend south between Edmonton and Calgary. These corridors terminate at a broad arc of thick sediments known as the Lethbridge Moraine. This feature contains numerous glacial landforms, including ice-thrust moraine. 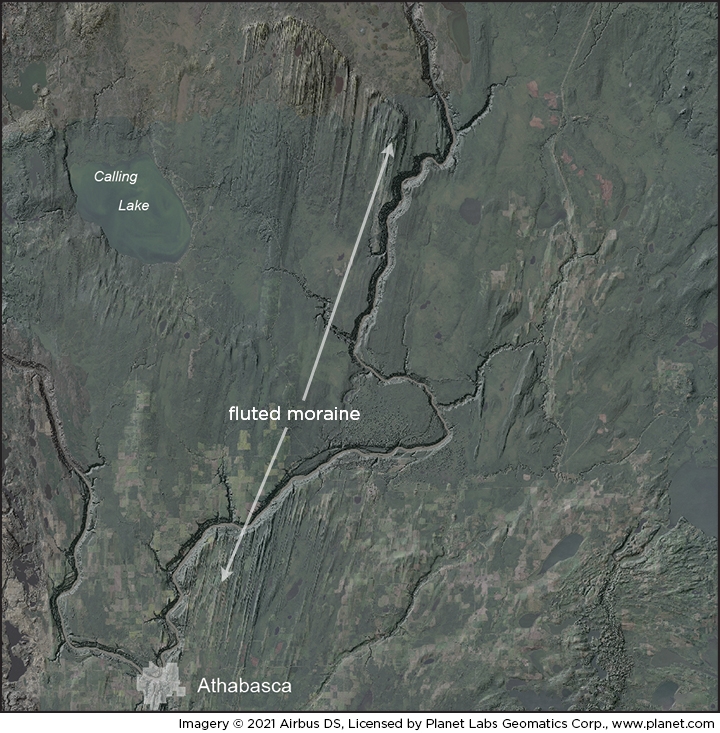 Ice-thrust moraine appears as low-relief mounds to large high-relief ridges on Alberta’s landscape. It contains glacially dislocated and/or deformed rafts of bedrock and/or Quaternary sediments that form small, low-relief mounds to large, high-relief ridges and include hill-hole pairs, rubble moraine, and thrust-block moraine. Such features are largely absent in southwestern and northern Alberta but are more prominent in central and eastern parts of the province, particularly where corridors of fluted moraine converge. However, the ice-thrust moraines in the Neutral Hills area attract the most attention, where the Mud Buttes provide one of the largest and best exposed examples of glacially deformed bedrock in North America (see image below). For over 100 years, geologists have studied these spectacular examples of folded and faulted bedrock. The results from these studies improved our understanding of the distribution, structure, and hydrology of glaciotectonically disturbed materials, which is an important engineering consideration for infrastructure planning and resources development.